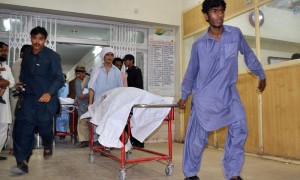 People at civil hospital shifting the bodies of those killed in the suicide blast near the Imambargah in Hazara town on Sunday. – Photo by Online

QUETTA: At least 28 people were killed and over 70 injured in a suicide blast near an Imambargah on Kirani road of Quetta’s Hazara town.

Capital City Police Officer, Mir Zubair Mehmood confirmed to Dawn.com that at least 28 people were killed and over 70 were injured as a suicide bomber riding a bicycle blew himself up in a crowded area 40 to 50 metres away from an Imambargah.

He admitted that despite strict security measures, the bomber struck a highly sensitive and guarded area of Quetta. He stated that the dead bodies would be handed over to their heirs after identification.

Para-military troops and police were dispatched in the area to control the situation. The injured were taken to CMH hospital in Quetta for treatment.

The Jafaria Alliance and Majlis-e-Wahdat-e-Muslimeen announced mourning for three days following the attack.