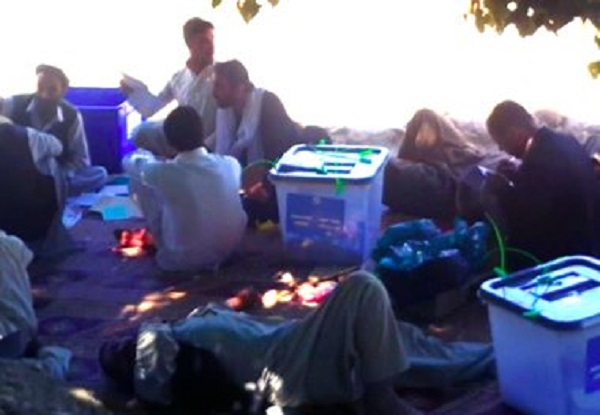 The provisional results which the Afghan Election Commission announced for the presidential election run-off are so implausible that any attempt to make them stick will undermine the political system which the world has worked hard to build up in Afghanistan over the past decade. The Commission claims a turn-out of 7.9 million voters, up 20% on the April turn-out. In Kabul, observers and candidate agents where able to watch polling day and reported fewer voters at polling stations than in April. But the Commission now reports a 12% increase in turn out.

But in the insecure provinces of Paktika and Khost, where observers and monitors could not reach the polling stations, the Commission asks us to believe that turn-out rose by 254% and 123% respectively – nothing short of a miracle, in terms of electoral politics, especially as claimed turn-out in the South East is now close to estimated total population. Irrespective of who is supposed to have won, these turn-out figures are ludicrous and completely out of touch with Afghan reality. Announcing them was an act of shamelessness. Anyone trying to give a mandate to any candidate based upon such fabricated figures will be complicit in blatant rigging and political vandalism.

Afghanistan has reached this point because for ten year those who were meant to help Afghanistan build democracy kept quiet as our rulers perfected the mechanisms for rigging in successive elections. Systematic rigging in both the 2004 and 2009 presidential elections set dangerous precedents for the 2014 poll. However what has happened this time round is both more brazen than what Afghans have previously witnessed and more damaging for the future of the country.

Hamid Karzai was already an incumbent at the time of the 2004 election. He relied on inflated figures from refugee voting in Pakistan to scrape over the 50% mark and achieve a first round victory. The US-led international community has heavily involved in running this election but was also heavily invested in Karzai and so kept quiet about his first experience of rigging. Instead they hailed this rigged election as the first successful democratic practice in the history of Afghanistan and merely noted that a few flaws could be expected first time round. Ordinary Afghans kept quiet as they hoped that an international backed leader might make their lives better.

2009 was supposed to be the first Afghan-owned election as Karzai got to pick the Election Commission. They rigged this 2009 with the help of an army of ghost voters in the south eastern provinces of Khost, Paktia and Paktika. The 2009 Election Complaints Commission included a few non-Karzai appointees, who created problems by exposing the mass ballot-stuffing, which denied Karzai first round victory. The US stepped in to sort out the mess and dispatched John Kerry to cut a deal which saw Karzai deemed re-elected, without ever crossing the 50% mark, an outcome which was expedient rather than constitutional.

The main lesson which Karzai and his allies learned from 2009 was that they should never to leave things to chance. More dangerously, Karzai has accumulated an inner circle of advisers who practice ethnic politics and are determined to use the presidential palace’s control over the electoral machinery to preserve what they consider to be the Pashtun divine right to rule over Afghanistan. This clique is prepared to gamble with the fate of the country in their willingness to manipulate the provincial administrations, the security forces and the electoral machinery to trump democratic politics.

Afghanistan has had access to the resources required to build an election apparatus according to normal democratic standards. But the clique around Karzai and more generally those who believed in the idea of preserving tribal privilege through capturing state power, by all means, resisted attempts to reform the electoral process. This time round the priority for this clique was to rig their way to ensuring that the successor to Karzai should be a Pashtun.

There have already been strong reactions from Afghanistan. But the Pashtun ruling elite and the departing international community probably do not yet realize the grave consequences of such a big gamble. The team of Dr. Abdullah Abdullah has revealed damning evidence of the systematic rigging, not least the phone recordings of Chief Electoral Officer Amerkhel instructing staff to rig in such a way that they side-stepped audit procedures.

Amerkhel fled the country, only to be dragged back by his masters. Observer missions, by now concerned by the way the process has been handled, have published calls for large scale vote audit. If anyone was in doubt as to whether rigging took place, they only had to listen to IEC Chair, Nooristani, in a 3 July interview with Tulo News, in which he complained about his Electoral Officer and admitted concerns over ridiculously high turn-outs, ballot stuffing. You only have to look at the clips on social media to work out how the stuffing was done. There should be no surprise that in such circumstances candidate Abdullah has let it be known that he will not accept a result cobbled together from these results.

Nooristani, the IEC chief, the EU observers, consecutive US delegation and commentators started talking about a political solution to this deadlock. If vote-counting or the law and constitution cannot solve the crisis, what might an extra-constitutional settlement look like? This is the point where almost parties have to stop and think again and again. The probable solutions could be,

1. Re-elections- The opposition has already asked for re-elections in many provinces under stricter observation. But neither is there a will in the ruling circle to take this option seriously nor would this help to change the outcome. The reality, which people were reluctant to grasp before the election, is that while the insurgency is under way, properly observed free and fair elections are impossible in Pashtun rural areas.

2. Dr. Ghani Led Coalition- It would be difficult for Dr. Abdullah Abdullah to be the part of the government led by Dr. Ghani since he has already declared that he has no desire to go for a coalition with a team involved in stealing the mandate of the people. On the other hand Dr. Ghani, now that he is confident of victory, has already started to flex his muscle and show off as a resolute leader who does not need to consult. His closest partners have already started to question their future role in working with Dr. Ghani.

3. Dr. Abdulah Led Coalition- this is out of the question for the ruling elite since their whole gamble in rigging the election was to keep Dr. Abdullah away from power. The Pashtun ruling elite takes it as a matter of shame to hand over power back to the North. If, the incumbent president equated the shame of signing the Bilateral Security Agreement (BSA) to the historical shame of the agreements of Durand and Gandomak, how could he simply hand over the Presidential Palace to a man who symbolized the end of two hundred and fifty years of Pashtun hegemony?

4. Third Option- Many believe that the end of Karzai’s tenure and the deadlock of the Presidential Polls leaves no option but a transitional setup for a specific period to address the flaws not only in both the electoral process and the constitution itself. According to this idea the power structure should be modeled to reflect the ground realities of Afghanistan. This suggestion does not have any constitutional basis. But proponents invoke a doctrine of necessity and argue that the constitution now is inadequate relative to the requirements of a highly diverse country like Afghanistan. This option seems to be attractive but leaves unsettled the main question of who should lead the country. There will be a long line of the candidates and many countries will again start lobbying for their candidate of choice.

5. The Old Option- Others concerned that the electoral deadlock might lead to irreversible damage to the country think that the incumbent president should continue for some time but under a strictly controlled agenda. He could lead a coalition government of Dr. Ghani and Dr. Abdullah for at least two years. The presence of two strong teams under the transitional leadership of president Karzai could lead Afghanistan in this critical period of transformation. The supporters of this theory believe that Karzai might be acceptable to both of the candidates since both of them worked under him for years and they are unlikely to find any other acceptable man to lead Afghanistan at such a time. Karzai under a charter accepted by both of the opponents could immediately start reforms in the electoral system and constitution and in 2016 there should be another more authentic and recognized election. But like the aforementioned probable way out, this formula again has many obstacles. First, this is also extra constitutional; secondly many in the team of Dr. Abdullah believe that Karzai himself is involved in the engineering the electoral results. Thirdly, Karzai’s continuation would be hard to stomach for the countries playing leading role among the International Community in Afghanistan.

It should also be kept in mind that none of the opponents will be quickly ready to accept any settlement except for the Presidential Palace. Dr. Ghani Ahmadzai, who has calculated his resolute image, seems to be in a hurry to replace Karzai and will not be ready for any settlement which could nullify his victory. Dr. Abdullah Abdullah and his supporters believe that the collaboration between IEC and his opponent stopped him from going to the Palace. He too believes he has to prevent his mandate from being stolen.

It is time for the Afghan political elite to wake up to the fact that manipulation of the process is like playing with fire. There is a very real threat to the whole system. Meanwhile terrorism is still a serious challenge for Afghanistan and the region. We can scarcely afford a political and constitutional crisis. The International Partners of Afghanistan in particular the US should take the situation seriously. We have already watched the spectacle of the military collapse of a US-allied state because of a ruling elite over-playing its hand in local sectarian politics.

Dr. Hussain Yasa is the Editor-in-Chief of the daily Outlook Afghanistan. Currently he is living in Germany in a self imposed exile. He can be reached at dr.yasa1967 gmail.com