By ROD NORDLAND and JAWAD SUKHANYAR 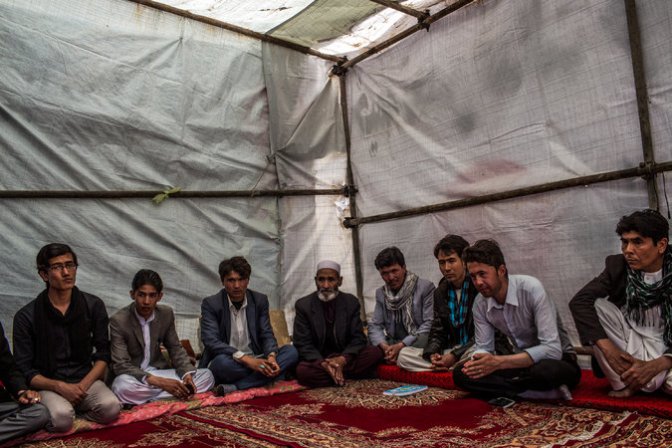 Activists and relatives of abducted Hazaras gathered this week in Kabul, Afghanistan, as part of a protest against government inaction. Credit Bryan Denton for The New York Times

KABUL, Afghanistan — A wave of kidnappings followed by numerous beheadings of members of Afghanistan’s Hazara ethnic group have spread alarm and anger among a people who have historically been this country’s most persecuted.

The police in Ghazni Province on Sunday confirmed that four Hazara farmers who had been kidnapped by the Taliban had been found beheaded in Ajristan District. Another six Hazaras from Daikundi Province who had been kidnapped by unknown assailants were also found dead, dumped in Ajristan District, less than a week after their families began searching for them, officials confirmed on Monday. Although the police have not yet recovered the bodies, local reports said they, too, had been beheaded.

Beheading is not normally a Taliban tactic, but the insurgents seem to be trying to make an ugly example of the Hazaras, in what is seen by some as a bid for attention.

Ali, a Hazara originally from Quetta, in western Pakistan, now living in Karachi. The 26-year-old said he was quitting his accounting studies to leave for Australia.

Habibullah, a student from Quetta, Pakistan, joined 34 Hazara refugees on a boat bound for Australia. Within 24 hours, the boat had sunk in a storm.APRIL 27, 2013

“The Taliban are trying to send out a new message that they are similar in their brutality to ISIS,” said Shahgul Rezaye, a Hazara member of Parliament, referring to Islamic State extremists from Iraq and Syria, who have reportedly been trying to recruit supporters in Afghanistan. “They’re trying to show they are as bad as ISIS.”

In what may prove to be the worst single episode, insurgents stopped a bus in Zabul Province in February, separated out the 31 Hazaras and took them away, releasing those from other ethnic groups. The victims have not been seen or heard from since.

Those and other attacks have galvanized the Hazaras. They have staged daily protests in Kabul, and blocked Parliament with demonstrators who stood and held empty bowls, to signify their unsuccessful effort to beg the government for help. A logo with the number 31 has become ubiquitous in displays here. Poetry and street theater are regular features at their protest tents, pitched in three places around Kabul and drawing frequent coverage on local television stations.

“He said, ‘Only God knows where they are, so only God can help them,’” said Zia Sahil, a Hazara activist who said the families viewed the president’s answer as inadequate. “It doesn’t answer why it took the government 48 days to come to the families and ask for descriptions of those who are missing.”

Afghanistan’s Hazara minority makes up between 5 percent and 10 percent of the population. They have long been derided by other Afghans as outsiders because they are thought to be descendants of Genghis Khan’s Mongol invaders, who subjugated Afghanistan in the 13th century. Hazaras had long been excluded from government jobs and education, and once were mostly concentrated in the remote mountains of central Afghanistan, in an area known as Hazarajat.

But the Hazaras prospered after the American invasion, with many migrating to Kabul and sending their young people, including girls, to school in much greater numbers than any other group.

Much of Hazarajat has escaped the warfare that has engulfed the rest of the country, which also helped the Hazaras to prosper. “In 13 years, there has never been one single Hazara suicide bomber,” Mr. Sahil said.

Often working or studying far from their Hazarajat homes, the Hazaras have had to travel long distances on dangerous roads to visit family members, making the recent attacks all the more disturbing for them. All of the attacks have been carried out against Hazara travelers, especially as they have passed through Pashtun areas where Taliban insurgents are prevalent.

That was what made the case of the 31 missing men so worrisome. The insurgents stopped three buses that passed within an hour on the country’s major highway, known as the ring road or Highway 1, as it runs through Zabul Province north of Kandahar.

The men’s abductors culled the Hazaras from Pashtuns and others, according to witnesses who were allowed to leave, and stuffed them into cars and drove them away. What most infuriated their families, however, were claims that the kidnappings took place on a stretch of highway between two government check posts that were so close by that the security forces must have seen what was happening to the bus passengers.

“They said they couldn’t do anything to intervene because it was not their responsibility,” said Murtaza Farjad, 24, another Hazara activist in Kabul.

Since then, there has been no claim of responsibility for the kidnappings, no ransom demands, and no word on the victims’ fates. Most of them were Hazara laborers who had gone to Iran to find work and been deported, which frequently happens to Afghans there.

Mr. Farjad, a college graduate with a degree in diplomacy, has not been home to see his family in Ghazni in two years, which is typical of many of Kabul’s Hazaras. “Hazaras cannot travel from Kabul to Behsood in Wardak Province,” he said, “Even 35 minutes out of the city, it’s not safe for us.” He was describing a journey to a Hazara area in the province adjoining the capital.

“It has become a crime to be a Hazara in Afghanistan,” Mr. Sahil said.

Ms. Rezaye said Hazara leaders have felt that the improvement in their circumstances in recent years has suddenly begun dissipating.That is partly because of rising insecurity and the government crisis under Mr. Ghani; there still is not a permanent defense minister, for instance, she said.

“These are operations against a specific ethnic group,” she said. “They’re trying to incite ethnic issues in the country.”

In addition to the ethnic difference, Hazaras are mostly Shiite Muslims, whereas the Taliban and most Afghans are Sunnis. Islamic State fighters, as well as the Taliban, have often directly targeted Shiites, whom they view as un-Islamic.

Some officials in Zabul believe that the kidnappers there may have affiliated themselves with the Islamic State. Amanullah Kakar, a community leader from the Khaki-Afghan District of Zabul Province where the abductions took place, said that it was locally well known that the kidnappers were followers of Mullah Abdullah Kakar, a former Taliban commander who has gone over to the Islamic State.

The Islamic State claims Quranic justification for its campaign of beheadings. Taliban followers in Badakhshan Province of northern Afghanistan recently beheaded government soldiers, but the Taliban released a statement on Tuesday criticizing the practice as un-Islamic.

The four Hazaras whose bodies were found beheaded in Ajristan District on Sunday were all farmers, kidnapped on their way to buy sheep, said Zaman Ali Hedayat, the governor of the district where the victims were from.

Mr. Hedayat said the men were initially kidnapped by the Taliban as a potential exchange for six Taliban insurgents taken prisoner by the government. Tribal mediators thought they had a deal to swap them all, but then the men’s bodies were found.

Whoever is responsible for the attacks, other ethnic groups should be just as worried by the new tactics being used against Hazaras, said Hussain Noori, a prominent Shiite imam.

“Such acts are not in the interest of any ethnic group,” he said. “They’re just trying to create sectarian problems between the Shiites and Sunnis in the country.”